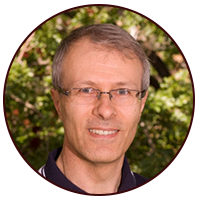 Vito Ferro is Associate Professor of Biotechnology in the School of Chemistry and Molecular Biosciences at the University of Queensland, Australia, and a member of the Australian Infectious Diseases Research Centre (AID). He completed BSc(Hons) and PhD degrees in organic chemistry at the University of Western Australia in 1992. Following postdoctoral studies at the Carlsberg Laboratory, Denmark, and the University of British Columbia in Canada, he joined the Australian biotechnology company Progen Pharmaceuticals in 1996 where he spent 12 years in various positions, including Director of Drug Discovery. He has been a key player in the development of two of the only four heparanase inhibitors to have reached clinical trials so far: PI-88 and PG545. He led the medicinal chemistry team that discovered PG545, a potent anti-angiogenic and anti-metastatic agent currently in Phase I clinical development for cancer. Following a brief period at Queensland University of Technology as a Principal Research Fellow he moved to his current position at the University of Queensland in 2010. His research interests are in carbohydrate and medicinal chemistry with a particular focus on glycosaminoglycans, especially heparan sulfate, and their mimetics as potential drugs for a range of diseases.