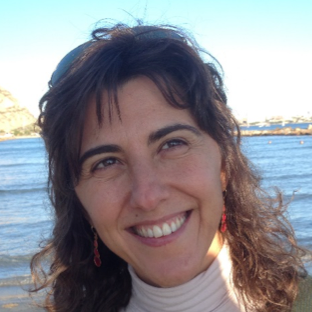 Prof. Ester Vázquez obtained her PhD degree from the University of Castilla-la Mancha (UCLM) in 2000. After carrying out her postdoctoral training in Trieste, Italy, she joined the Faculty of Chemistry at UCLM in 2001, where she was promoted associate professor in 2010. In 2007 she received the “Ibn Wafid de Toledo“ award for young researchers of Castilla-La Mancha. In April 2017 she became Director of the Institute for Applied Scientific Research (Instituto de Investigación Científica Aplicada, IRICA) at UCLM.
Her scientific interests focus on the synthesis, functionalization and applications of carbon nanostructures using non-conventional methodologies, especially microwave radiations and ball milling techniques. Her group succeeded in the preparation of stable suspensions of few-layer graphene in water, which has allowed the biological exploration of this form of carbon under physiological conditions. Recently, she became interested in the preparation of smart gels for applications in drug delivery and tissue engineering.
She collaborates with industrial partners, such as Antolin group, and numerous European groups within the framework of the Graphene Flagship project.

The synthesis of different soft polymer networks, by in situ polymerization in the presence of graphene derivatives, is a suitable approach to attain three-dimensional hybrid materials. The role of the nanomaterial within the polymer network is primarily intended for the reinforcing (i.e. increasing the stiffness and toughness), however, we have shown that the presence of graphene can also enhance features such as biocompatibility and responsiveness to external stimuli, sensing or self-healing ability. These syntheses require the production of large amounts of graphene materials, and for this reason, top-down methods, such as exfoliation of graphite, are generally favoured.
Ball milling of graphite in the presence of melamine, developed in our labs, is a method of choice to exfoliate graphite and generate dispersions of few-layer graphene in many solvents, including water. Moreover, water dispersions can be lyophilized giving rise to a fine powder. The re-dispersion of this powder can be easily achieved by mild sonication in polar solvents including aqueous media. This advantage is crucial for the subsequent interaction of graphene with the organic monomers, giving rise to truly hybrid composites.
During this talk, we will discuss optimized ways to use graphene for the preparation of hybrid hydrogels, which behave as multi-stimuli responsive materials.