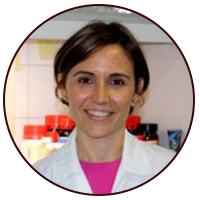 Mariola Tortosa obtained her B.S. in Chemistry from the Universidad Autónoma de Madrid (UAM) in 1999. She then joined the group of Dr. R. Fernández de la Pradilla at the Instituto de Química Orgánica General (CSIC, Madrid, Spain) to carry out her graduate work. In 2004, she received the Lilly Award for PhD students. In 2005, she moved to The Scripps Research Institute in Florida (USA) to work as a Postdoctoral Fellow with Prof. William Roush. In 2008 she returned to the Instituto de Química Orgánica General (Madrid, Spain) as a Research Assistant (Juan de la Cierva). In 2011 she started her independent career at the Universidad Autónoma de Madrid as an Assistant Professor (Ramón y Cajal). More recently, she received an ERC-Starting Grant awarded by the European Research Council to work on the project “Design and Applications of Unconventional Borylation Reactions”. She received the Young Investigator Award from the Royal Society of Chemistry of Spain (2014), the Young Spanish Investigator Eli Lilly Award (2014) and the Thieme Chemistry Journal Award for young professors (2015). In 2017 she was promoted to Associate Professor at UAM (Profesor Contratado Doctor).