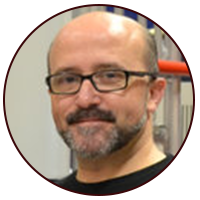 Jesús studied Chemistry at the University of Seville (Spain). He then obtained his doctorate working at the Instituto de Investigaciones Químicas (IIQ) of the Consejo Superior de Investigaciones Cientificas and University of Seville, in 2002, in the “Carbohydrate Group” led by Prof. Manuel Martín-Lomas, under the supervision of Dr. Pedro Nieto. His thesis was based on the study of the 3D structures and dynamics of oligosaccharides models of glycosaminoglycans (GAGs) by NMR spectroscopy and molecular dynamics simulations. He then moved to Germany for a three-year postdoctoral stay in the research group of Prof. Thomas Peters at the University of Lübeck, where he got a Marie Curie Intra-European Individual Fellowship to specialize in ligand-based NMR spectroscopy for protein-ligand interactions, with a focus on molecular recognition of substrates by the human blood group B galactosyltransferase (GTB). After that, he joined back the Carbohydrate Group of IIQ (Seville) in 2006 as a «Juan de la Cierva» postdoctoral scientist, and from 2008 to 2013 he worked at the “Glycosystems Laboratory” of the IIQ as a senior scientist, with a prestigious «Ramón y Cajal» award, on NMR and computational chemistry for the study of the interactions of glycosaminoglycans, glycomimetics, and gold glyconanoparticles with protein receptors of relevance in infection processes (anti-HIV-1 2G12 antibody, DC-SIGN and langerin lectins). From September 2012 to September 2013 he was the Secretary of the NMR Group of the Spanish Royal Society of Chemistry. In August 2013 Jesus joined the School of Pharmacy of the University of East Anglia as a Research Fellow. He was promoted to Lecturer in August 2016 and is currently Senior Lecturer in NMR Spectroscopy since August 2017 within the research area of Drug Delivery and Pharmaceutical Materials.

The Angulo lab at UEA has research interests focused on the characterization of structure and dynamics of biologically active molecules, with a particular focus on glycans, and the molecular recognition of ligands by receptors of both kinds, natural (proteins, nucleic acids,…), or non-natural (soft bio-materials), heavily relying on NMR spectroscopy and computational techniques.