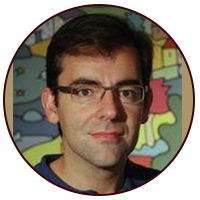 Fernando López García was born in 1975 in A Estrada; he studied Chemistry at the University of Santiago de Compostela where he obtained his degree in 1998.

During his PhD at the same University, under the supervision of Prof. José L. Mascareñas, he carried out two predoctoral stays at the ETH-Zürich (with Prof. Erick M. Carreira) and at Yale University (with Prof. John F. Hartwig). After receiving his PhD in 2003, he was awarded with a Marie-Curie Postdoctoral fellowship to join the group of Professor Ben L. Feringa at the University of Groningen, where his work was focused on enantioselective catalysis.

In 2006, he joined the University of Santiago de Compostela under the Ramón y Cajal programme. In 2008, he became Tenured Scientist at the Spanish National Research Council (CSIC) and joined the Instituto de Química Orgánica General (IQOG). In 2009 he received the RSEQ-SIGMA-ALDRICH Young Chemists Award of the Spanish Royal Society of Chemistry. Presently, he has been assigned to the Centro Singular de Investigación en Química Biolóxica e Materiais Moleculares (CIQUS), at the University of Santiago de Compostela. His research is focused on the development of new transition metal-catalyzed processes with a focus on enantioselective catalysis.